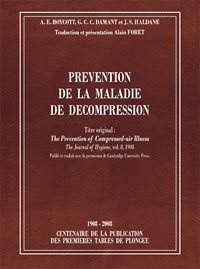 In June 1908 appeared, inThe Journal of Hygiene(Cambridge University Press) a 100-page text, now cult, entitledThe Prevention of Compressed-air Illness.As soon as it appeared, this publication was going to revolutionize the methods of decompression in diving.

John Scott Haldane, in collaboration with AE Boycott and GCC Damant, had just established the first dive tables, thus paving the way for safer decompression, in line with the work of Paul Bert (Barometric pressure) published thirty years earlier.
This book is the French translation of this founding publication plus an introduction on the history of decompression (desaturation).

Often mentioned, this founding text was not well known and, dare we say it, was most of the time mentioned wrongly and through […]. Alain Foret's merit lies in having taken the subject head-on by going to the bottom of things. […] We also welcome the introduction, which is remarkably interesting and concise.
Subaqua- Review of the FFESSM

It was between 1905 and 1908 that Haldane became interested in diving as an object of scientific research. Appointed member ofAdmiralty Committee on Deep-Water Diving, the Admiralty relies on its extensive knowledge of gas and breathing to solve the problems of deep diving. To carry out his experiments, John Scott Haldane surrounded himself with Dr AE Boycott and Lieutenant GCC Damant.

For Haldane, the main challenge is to find another way than "slow and uniform decompression" to avoid the risk of pathogenic bubbles forming on ascent. In 1905, this was the only solution proposed:

This approach is not satisfactory because:

However, the mail from the Royal Navy of 1905 is unambiguous: by creating a commission on deep diving, it wants a reliable and operational solution to be found for dives up to 55/60 m. Haldane must therefore be innovative and find another process.

At first, Haldane fights, on a scientific level, the very principle of slow and uniform ascents: "To avoid the risk of bubble formation during decompression, it was recommended until now that it be as slow and uniform as possible.. "He shows that, for deep dives, a"Uniform decompression at this rate, already dangerous for goats, would undoubtedly be extremely dangerous for humans, who desaturate much more slowly than goats".

Haldane then tries to find a new method of decompression (desaturation). His reflection is based on an observation unanimously shared at the time, including by Paul Bert: “Those who have experience working in compressed air know it well, there is no risk of chamber sickness, even with a very rapid rise, provided that the pressure reached does not exceed a certain value. It seems perfectly clear that no symptoms appear when the relative pressure is less than one atmosphere [10 meters deep], regardless of the duration of exposure. In other words, Haldane notes that it is possible to go from 2 bars (10 m deep) to 1 bar (sea level) without risk whatever the duration of exposure.

He will then extend this reasoning to all depth zones: "Therefore, it seems probable that, if a sudden decompression from two atmospheres of absolute pressure to one is safe, so should be four absolute atmospheres to two, six absolute atmospheres to three, etc..  Our experiments, described in detail below, have shown this to be the case. The desaturation process can, therefore, be greatly accelerated by rapidly reducing the absolute pressure by half, and by ensuring that, for the remainder of the decompression, saturation in any part of the body can never reach more. double the air pressure. The main advantage of this method is that, from the start of decompression, the elimination of nitrogen from the tissues takes place at the highest possible speed without danger.. "

Haldane thus leads to the creation of the rise in stages taking into account the pressure and the duration of exposure to determine the depth and time of the stops:

"This method greatly simplifies the problem of decompression safety, and removes many practical difficulties, especially with regard to deep diving. We can call it a method of decompression in stages, and it is described as such below, although its essential characteristic is not that the decompression is carried out in stages, but in that it is rapid until the absolute pressure is halved. and then continued slowly. "

Characteristics of these tables

The 10 hypotheses adopted by Haldane

Many websites are spreading false information regarding Haldane's assumptions. In order to clarify this point, here are the 10 hypothesesactually retained by Haldane, with reference to the page number corresponding to the original publication of 1908 in The Journal of Hygiene.

Other contributions from Haldane

Beyond the creation of stepwise decompression, Haldane makes various very interesting observations throughout the publication:

You can access the original version of this text, in English, published in volume 8 of theJournal of Hygiene. Click hereto get there.

Thanks: Cambridge University Press for permission to translate.

Historical perspective, research on decompression sickness, from its origins to 1908
Pressure chambers
The bells to dive
Triger devices
The spacesuits
Research is organized
Paul Bert, father of diver physiology

Translation of the text of Boycott, Damant and Haldane
Introduction

1. Devices
2. Choice of experimental animals
3. Respiratory exchanges in goats
4. Methodology for conducting the experiments
5. Symptoms seen in goats
6. Results of experiments on goats
7. Differences in individual susceptibility, among the animals used, to decompression sickness
8. Pathology of caisson disease in goats
summary
Appendices

BIOGRAPHY OF THE AUTHORS

A question, a suggestion, talk to the translator, Alain FORET:Click here.

Manage cookie consent
We use cookies to optimize our website and our service.
Manage options Manage Services Manage suppliers Find out more about these purposes
See preferences
{title} {title} {title}